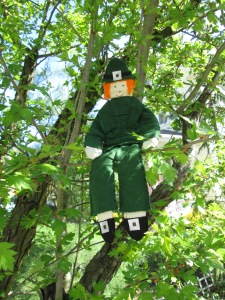 Hello to you!  Nannie here!  I am lovin’ that Finney gives me some space to have a talk with you!  If you remember, last week we spoke of the prayer of Grandmother Tess in the movie, “The Secret of Roan Inish,” and that it was inspired by Peig Sayers who spent most of her life on the Great Blasket Island.  Now…Finney tells us that the prayin’ words, that his Family says, go along these lines…

We eat together and thank God,

For our home on this grand old sod!

We thank Him for our food and drink…

And for each other and we think

Of all that we are grateful for…

And, for our place in Ireland’s lore!

These words were inspired for me, by a prayer custom my Dad (1904-1995), God rest him, brought to our Family life.  When Dad was growing up in Cobh, in County Cork, in the south of Ireland, he learned prayin’ words that (in Irish, so I am not really sure how to spell what it was I think he taught us all to say — I never saw it in writing!) had four lines.  The first line asked for protection from having a hunger or thirst “on us.”  The next three lines all deal with spiritual protection (according to my limited Irish translational skills!)…from evil, then from the evil within ourselves, and then from the fires of hell.  Interesting it was only the first prayerful line that addressed physical needs.  The other 75% was totally spiritual, and, to me, framed in a deep understanding of the need for and dependence on God for protection from sin…very much including our own sinful natures…no pointing fingers there!

In regard to the story-poems, “Cookin’!” and “Bakin’!”, we see that seaweed, apples, berries, honey, and fresh water are staples for Leprechaun Families! 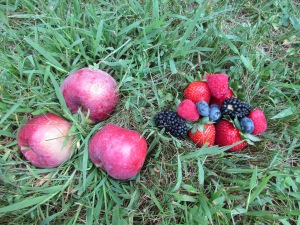 I find that http://www.libraryireland.com is a wonderful resource for Irish information of all kinds, especially from the older writings.  At this website, we find A Smaller Social History of Ancient Ireland, written by Patrick W. Joyce in 1906.  Dr. Joyce tells us, “”The sea-plant called in Irish duilesc, and in English dillesk, dulse, dulsk, or dilse, growing on sea rocks, was formerly much used as an article of food, that is, as an accompaniment…Dillesk is still used; and you may see it in Dublin hawked about in baskets by women: it is dry, and people eat it in small quantities raw, like salad…The apple (ubhall, pronounced ooal) appears to have been as much cultivated and use in old time as at the present.  Apples, when gathered, were hoarded up to preserve them as long as possible:  they were generally uncooked.” 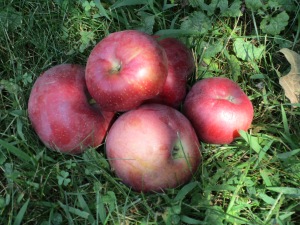 Of course, we always have stories about the monks, and, the “libraryireland” website gives us information from An Illustrated History of Ireland by Margaret Anne Cusack… “The rule of St. Alban says: “When they [the monks] sit down at table, let them be brought [served] beets or roots, washed with water, in clean baskets, also apples, beer, and honey from the hive.”

This website also tells us from Ireland’s Welcome to the Stranger, written in 1847 by A. Nicholson, that “a supper of comfort” had “fresh apples upon the table.”

At Irishamerica.com, in “Sláinte!  Ireland: It’s the Berries!” by Edythe Preet (Columnist), summer months in Ireland are described as being all about wild strawberry and raspberry patches, blueberries “found growing on heather-covered mountainsides,” with “countless hedgerows along country roads…producing tons of deep purple blackberries!”  Also described is blackberry mousse as “an elegant dessert,” and, blackberry sauce which “can be sweet or savory to complement ice cream and custards, or roast fowl and game.  Combined with apples, blackberries make one of Ireland’s most popular desserts, a rich pastry tart.”  We are also given a hint as to how Finney’s Mum may do her bakin’ and cookin’…”In years past, Irish cooks baked in the all-purpose cast iron black pots that sat atop smoldering turf fires and only diligent watching and turning kept their pies from becoming singed from the fierce heat of the glowing coals.”  And, lastly, choosing only one more culinary thought presented by Edythe, we learn, “At the height of summer when Ireland strawberries, raspberries, blackberries, and blueberries are all in season at once, these brilliantly hued fruits are frequently combined to make Summer Pudding, one of the world’s most strikingly beautiful and delicious desserts.”

No wonder Finney’s Mum does such great work in her “kitchen!”

Just a couple more fun facts (hope you don’t say you need a nap, like Finney does!)                There is a place in Co. Cork , not too far from Cobh, where my Dad (me Dad!) was born and raised, and Blarney (only down the road a bit), called Ballyhooly.  It is west of Lismore (yes, the same name as the beautiful Waterford crystal pattern!), and it is on road N72 heading west toward Mallow.  It is located in what is called the valley of the Blackwater, according to Dr. Joyce [as told by Rev. J. F. Lynch (www.corkpastandpresent.ie)], who tells us it was renowned for its apples and cider, and who explains Ballyhooly  as town of the apple-ford, being from Irish Baile atha ubhla, and says that the place is named Atha-ubhla, or ford of the apples, in Book of Lismore [medieval manuscript — one of “The Ancient Books of Ireland – 1480, (Michael Slavin)].

In Note From Nannie with Finney’s “Bakin’!” story, it was mentioned that “Apples have been grown in Ireland for at least 3,000 years…and that…St. Patrick is said to have planted a number of apple trees in Ireland, including one…close to where Armagh is now situated.  Early monastic records tell us that the monks were given apples with their meals, specially at festival time.” (Georgina Campbell’s Ireland – http://www.ireland-guide.com)  As to why Armagh might be significant, we learn at http://www.discoverireland.com, that “In 445, Patrick established the Seat of Armagh as the centre of Christian learning in Ireland.  A monastery church and an archbishop’s house were built here.  This was probably another challenging gesture to the druidic order at Navan Fort.  The ancient Ulster capital, this had been the royal seat of the Kings of Ulster.  By building his most important church close to the symbol of pagan royalty, Armagh became the most important town in Ireland.  The only clergy entitled to spread the Christian faith were taught in the abbey in Armagh.”

Well, phew…as Finney would say…all that yakkin’ has made me so tired and hungry!

I am so happy you stopped by to visit Finney and me!  Thank you!

As Finney would say…

I’m going to lay down my head, 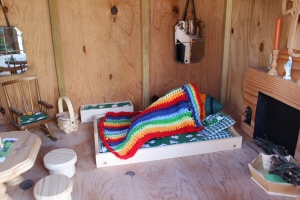 And hope to have sweet dreams tonight,

And sleep peacefully in Grace-light.

I hope the same for you this night…

And safely wake in morning light!

I am so glad we talked today!

God bless you is what I do say! 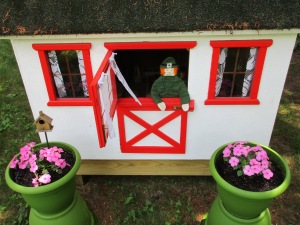 Happy, happy Birthday to our Bess! Where have the years gone? Thank you, God, for the years we have had! 🙏❤📿☘
%d bloggers like this: